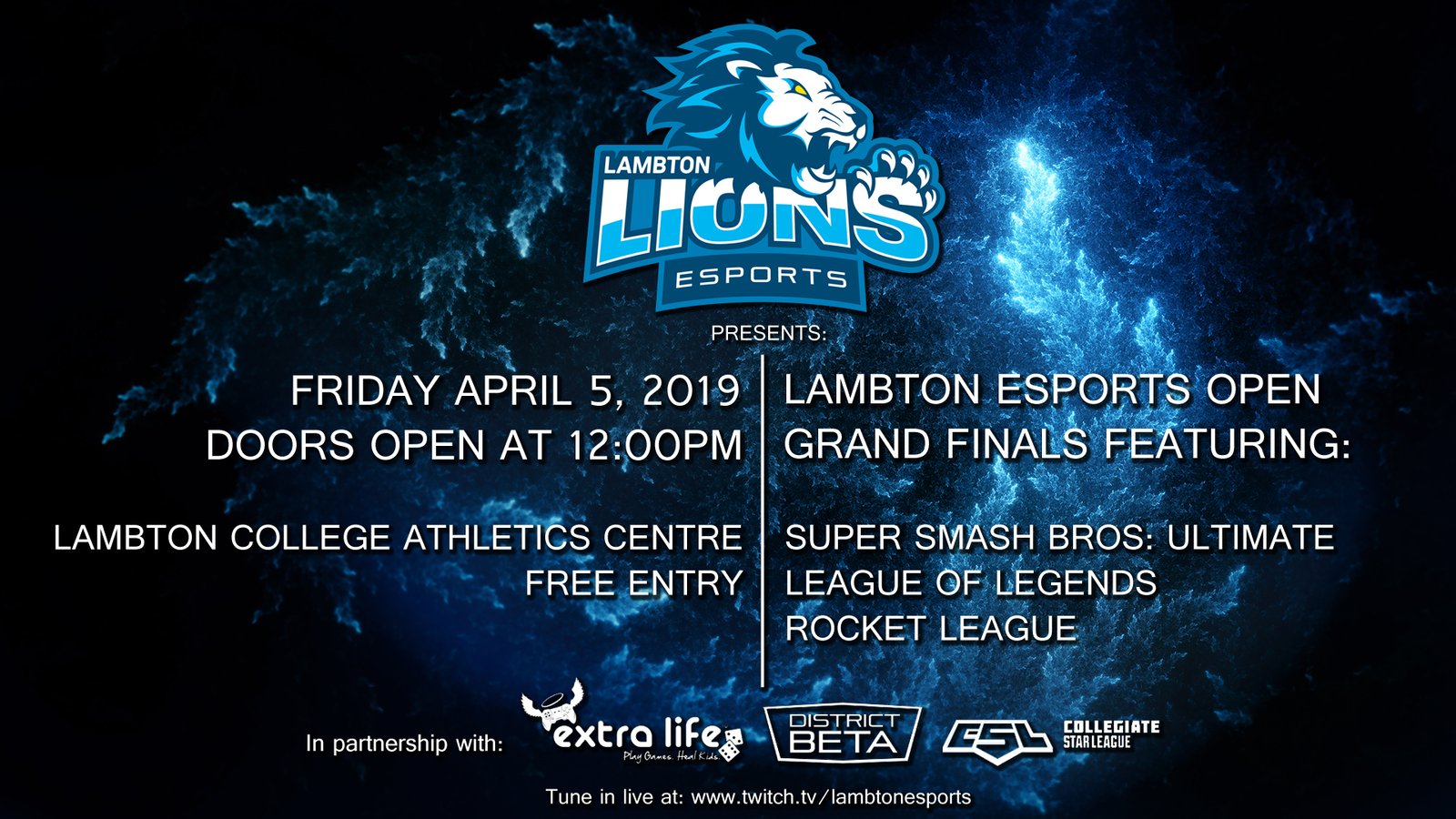 This past Friday concluded league play for the Lambton Esports Open and competition was fierce! Our first match of the night saw Super Saiyjins vs Pizza time and it looked to be in favor of Pizza Time as the Super Saiyjins were down a player. Pizza Time won the first game 3-2, but the Super Saiyjins fired back and won the next game 2 games 5-3 and 5-4 in overtime. Our next match up saw Despacito 2 vs Beau’s Pancakes. Despacito 2 was ruthless overwhelming Beau’s Pancakes and won both games 4-1 and 3-0. Our last match of the night saw a tiebreaker between Pizza Time and The Duo. Pizza Time ultimately broke the tie with a score of 4-0. This sets up Despacito 2, Beau’s Pancakes, Pizza Time, and The Duo to compete in this Friday’s LEO finals at the Lambton College Athletics and Fitness Complex. 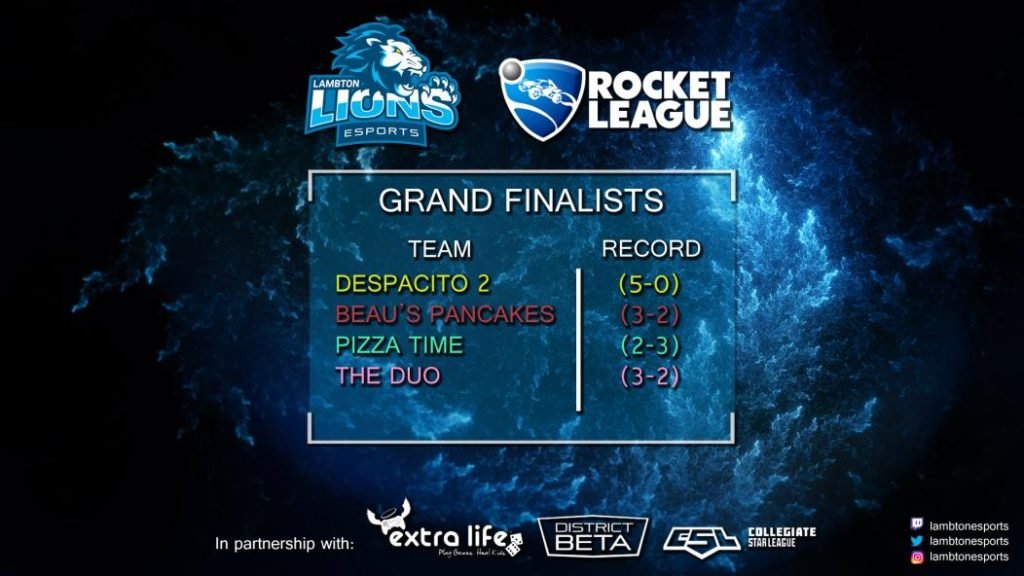 Saturday also marked the final round of the Super Smash Bros. Ultimate qualifier tournaments, meaning the final 8 contestants progressing to the finals on April 5th have been confirmed. With the top 2 spots already locked down, this weekend saw both Sauce and Kbash take their foot off the gas and they both picked up far fewer points than usual. Marcules did not take advantage though, and after picking up only two points slid to 4th place, losing out on a podium finish to Error who again put in a very strong performance earning himself 10 points in the process. N3on, in only his second week of competition, surprised us all again with a monstrous performance and took home the maximum points available, and finished the week in 5th place. Consistency was key for Smaggles and Flindo, as their middle of the table performances in all 4 weeks earned them 6th and 7th place respectively. After 3 weeks of good performances, Goodknight headed into the final round with a nice 13 points and he was still able to sneak in and secure that 8th place finish. There is no clear-cut favourite and it is anyone’s guess who will take home the top prize, with everything to play for this Friday as LEO 2019 draws to a close! 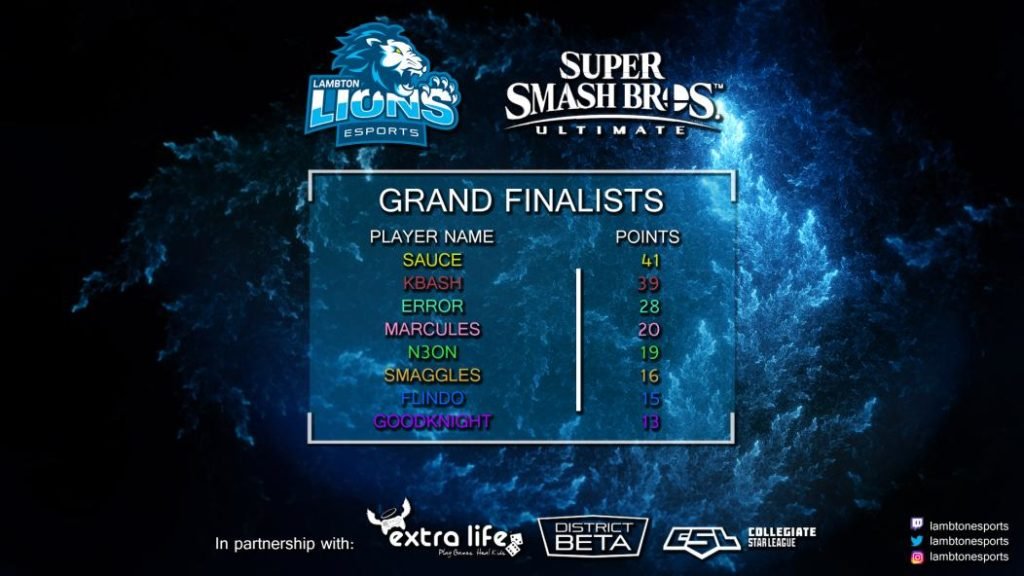 On Sunday the League of Legends play saw the two top teams, Vorpal Swords and Kawii Killers, enter the Rift to see who is the top team in the Lambton Esports Open! After a long 48-minute game, Kawii Killers come out victorious, tying for first place with 7 wins and 1 loss. Road 2 Success lived up to their name and won both of their games this weekend and secured their 3rd place spot. Unfortunately, that leaves the LC State Boyz and Drip Too Hard at the bottom of the bracket unable to secure a spot for the finals April 5th. 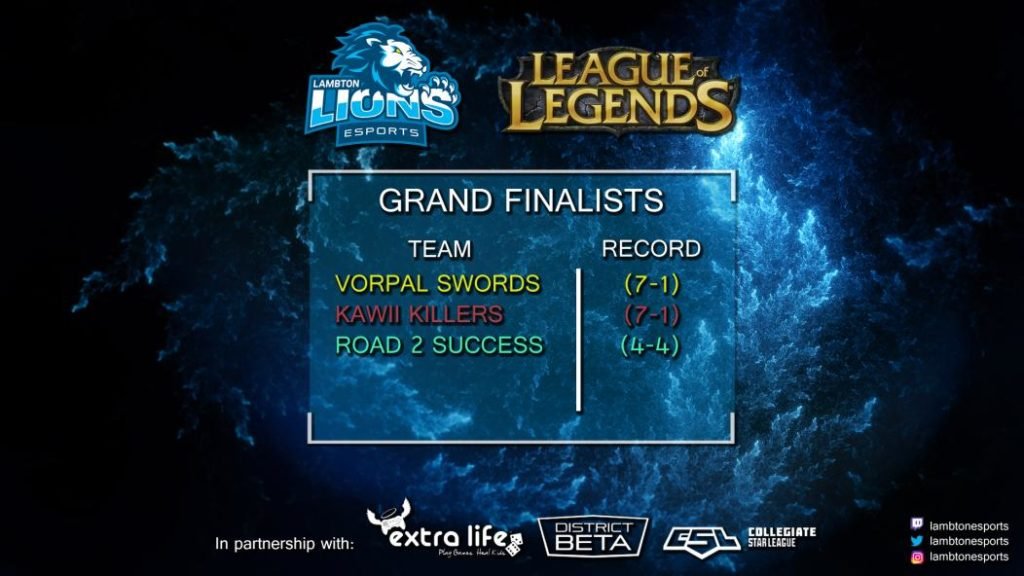 With all 4 weeks of league play coming to an end, we are looking forward to April 5th where all the top competitors will be playing for their chance to win a scholarship to Lambton College. If you want to come to see all the action live in person the competition will be held at Lambton College’s new Athletics and Fitness Complex. Doors open at 12pm and competition starts at 2pm. If you can’t make it to the live event, the action will be streamed LIVE on our Twitch page twitch.tv/lambtonesports.